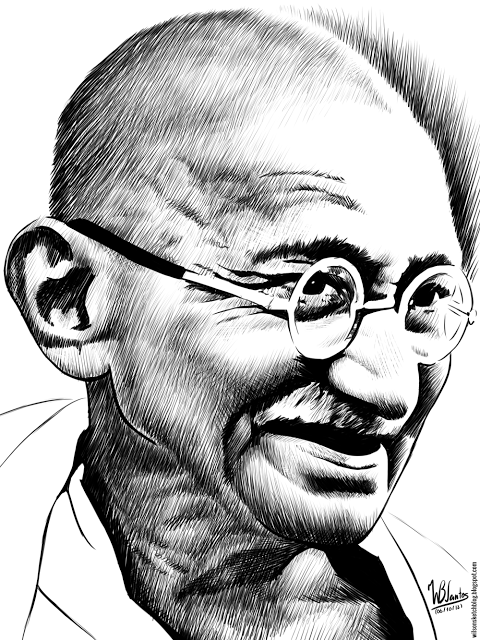 Mohandas Gandhi the man on the Indian currency , smiling old man hanging on the walls of government buildings,he was a fakir for some , bapu to some , now a days loved by few and hated by many .

Probably most written about personality in the last 100 years , yet an enigma to a nation which he is credited of liberating !

In musafir movie there is a dialogue I love ,it goes some thing like this ,
Bapu all his life fought with nonviolence and loved peace and we put his picture on one thing which is root cause for all violence , Paisa …. Money !

this is sadly how now a days he is remembered , not the way he is supposed to be remembered , he is not understood by many , and I am no expert , but still one can apply logic and reason and deduct a lot of things .

He is human and like all humans he also had flaws , did mistakes and blunders . But at least he tried to raise above in many ways . He did all what he could have done and Please do realize the India he walked was much different from today’s .

Its easy to be ignorant but with out knowing any thing we cannot judge a man for what he did , it like passing a judgement with out a trail .

Please do read some books on this man , there are every type of them , autobiography , criticism, cynic books , threadbare analysis books , read them understand the man . I am sure there is lot to know about him and his life is definitely a message as he wanted it to be .

he will raise more questions than answers . he will make you think . He never knew me , but he fought for me ,sacrificed for me took blame , this is the least i could do for that man who selflessly tried to unite this country , liberate it and rid it of social evils , like caste and untouchability .

Gandhi for me is an Idea rather than a man and what godse forgot when he pulled that trigger is Ideas are bulletproof , he is in my brain as long as I live this idea is going to stay with me ,make me think .

I want to be the change I wish to see in this world . I love you Bapu ! Happy Birthday .