Skip to content
We are Moving our blog iksa.in (Since 2013) to "ParivarthanIAS.com" , we request you to Subscribe to the new blog . We sincerely hope you will continue your support. 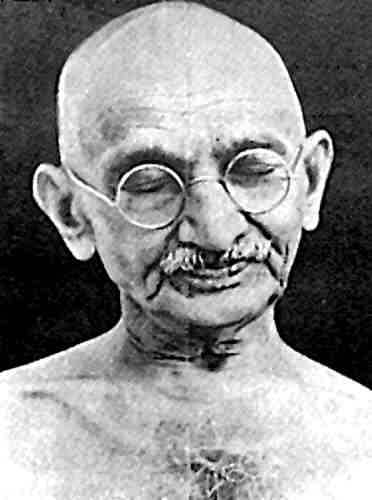 On the occasion of the 66th anniversary of Gandhiji’s martyrdom on January 30 this year, we offer our sincere homage to his abiding memory by reproducing from his writings and utterances at the fag end of his life.

Delhi is the metropolis of India. If, therefore, we really in our hearts do not subscribe to the two-nation theory, or in other words, if we do not regard the Hindus and the Muslims as constituting two distinct nations, we shall have to admit that the picture that the city of Delhi presents today, is not what we have envisaged always of the capital of India. Delhi is the Eternal City, as the ruins of its forerunners, namely, Indraprastha and Hastinapur, testify.

It is the heart of India. Only a nitwit can regard it as belonging to Hindus or to Sikhs only. It may sound very harsh but it is the literal truth. From Cape Comorin to Kashmir and from Karachi to Dibrugarh in Assam, all Hindus, Muslims, Sikhs, Parsis, Christians and Jews, who people this vast subcontinent and who have adopted it as their dear motherland, have an equal right to it.

No one has a right to say that it belongs to the majority community and that the minority community can only remain there as the underdog. Whoever serves it with the purest devotion, must have the first claim. Therefore, anyone who wants to drive out of Delhi all Muslims as such, must be set down as its enemy number one and, therefore, enemy number one of India.

We are rushing towards that catastrophe. It is the bounden duty of every son and daughter of India to take his or her full share in averting it.

What should we do then? If we would see our dream of panchayat raj, that is, true democracy, realised, we would regard the humblest and the lowest Indian as being equally the ruler of India with the tallest in the land.

This presupposes that all are pure, or will become pure, if they are not. And purity must go hand in hand with wisdom. None would then harbour any distinction between community and community, and caste and outcast. Everybody would regard all as equal with oneself and would hold them together in the silken net of love.

No one would regard another as untouchable. We would hold as equal the toiling labourer and the rich capitalist. Everybody would know how to earn an honest living by the sweat of one’s brow and make no distinction between the intellectual and physical labour.

To hasten this consummation, we would voluntarily turn ourselves into scavengers. No one, who has wisdom, will ever touch opium, liquor or any intoxicants. Everybody would observe swadeshias the rule of life and would regard every woman, not being his wife, as his mother or sister or daughter, according to her age, never lust after her in his heart.

He would be ready to lay down his life when the occasion demands it, and never want to take another’s life. If he is a Sikh, in terms of the commandment of the gurus, he would have the heroic courage to stand singlehanded and alone, without yielding an inch of ground, against the one lakh and a quarter, enjoined by them. Needless to say, such a son of India, will not want to be told what his duty in the present hour is.

[From an article for Harijan he dictated on January 14, 1948, the second day of his last fast that began on January 13 with the objective of bringing about a reunion of hearts of all communities]

Many Musalman friends had complained of the Sardar’s so-called anti-Muslim attitude. I had, with a degree of suppressed pain, listened to them, without giving any explanation. The fast freed me from this self-imposed restraint and I was able to assure the critics that they were wrong in isolating the Sardar from Pandit Jawaharlal Nehru and me, whom they gratuitously raise to the sky.

This isolation did them no good. The Sardar had a bluntness of speech which sometimes unintentionally hurt, though his heart was expansive enough to accommodate all. Thus, my statement was meant deliberately to free a lifelong and faithful comrade from any unworthy reproach.

And lest my hearers should go away with the idea that my compliment carried the meaning that I could treat the Sardar as my yes-man, as he was affectionately described, I balanced the compliment by adding the proviso that the Sardar was too masterful to be anybody’s yes-man.

When he was my yes-man, he permitted himself to be so named, because whatever I said instinctively appealed to him. Great as he was in his own field and a very able administrator, he was humble enough to begin his political education under me, because, as he explained to me, he could not take to the politics in vogue at the time when I began my public career in India.

When power descended on the Sardar, he saw that he could no longer successfully apply the method of non-violence, which he used to wield with signal success. I have made the discovery that what I and the people with me had termed non-violence was not the genuine article, but a weak copy known as passive resistance.

Naturally, passive resistance can avail nothing to a ruler. Imagine a weak ruler being able to represent any people. He would only degrade his masters who, for the time being, had placed themselves under his trust. I know the Sardar could never betray, or degrade his trust.

I wonder if, with a knowledge of this background to my statement, anybody would dare call my fast a condemnation of the policy of the Home Ministry. If there is any such person, I can only tell him that he would degrade and hurt himself, never the Sardar or me.

Have I not before now declared emphatically that no outside power can really degrade a man? He only can degrade himself. And although I know that this sentence is irrelevant here, it is such a truth that it bears repetition on all occasions. My fast, as I have stated in plain language, is undoubtedly on behalf of the Muslim minority in the Indian Union and, therefore, it is necessarily against the Hindus and the Sikhs of the Union and the Muslims of Pakistan.

It is also on behalf of the minorities in Pakistan, as in the case of the  Muslim minority in the Union. This is a clumsy compression of the idea I have already explained. I cannot expect the fast taken by a very imperfect and weak mortal, as I truly confess I am, to have the potency to make its proteges proof against all danger.

The fast is a process of self-purification for all. It would be wrong to make any insinuation against the purity of the step.

[From dictated answers to questions by newspapermen on January 15, 1948]

The citizens of Delhi and refugees have a heavy task in front of them. Let them seek occasions for meeting together as often as possible in perfect mutual trust. It was a soul-stirring sight for me to meet the Muslim sisters in large numbers yesterday. The girls in my party told me that the sisters were sitting in the Birla House, uncertain whether they could come to me.

They were in purdah, most of them. I asked them to be brought in and they came. I suggested that they would not have thepurdah before their fathers or their brothers. Why should they think me less? And off went the purdah, without exception. This is not the first time that the purdah has disappeared before me.

I mention the incident to illustrate what genuine love, as I claim mine to be, is able to do. The Hindu and the Sikh women should go go the Muslim sisters and establish friendship with them. They should invite them on ceremonial occasions and be invited.

The Muslim girls and boys should be attracted to common schools, not communal.

They should mix in sports. Not only should there be no boycott of the Muslims, but they should be induced to resume their previous occupations. Delhi is poorer for the disappearance of the exquisite workmanship of the Muslims. It is a miserable and miserly thing for the Hindus and the Sikhs to wish to take away from them their means of livelihood.

The condition of keeping me in your midst is that all the communities in India live at peace with one another, not by force of arms, but that of love, than which, there is no better cement to be found in the world.