IN 2012, after 244 years in print, Encyclopedia Britannica became online-only. Now a group of German fans of Wikipedia, an online, user-generated encyclopedia, are raising money for a move in the opposite direction. A print version of the English Wikipedia—1,000 bulky volumes and 1,193,014 pages—will be on show at a gathering of Wikipedians later this year. A world tour will probably follow: a global victory lap for the internet’s most impressive crowd-sourced creation.

The books will be instantly out of date; several times a second an article is amended online. But that is not the point. Wikipedia, which was founded in 2001 by Jimmy Wales and Larry Sanger, has a right to show off.

With articles on subjects as diverse as Spaghetti code (“a pejorative term for source code”) and SpaghettiOs (“an American brand of canned spaghetti”), it has 1,600 times as many articles as the Encyclopedia Britannica. It is the world’s fifth most popular website, with editions in 287 languages. (The English one is the biggest, with 4.4m articles.)

On any given day 15% of all internet users visit it, amounting to 495m readers a month.

Visitors to Wikipedia’s headquarters in downtown San Francisco, not far from the buzzing offices of giant internet firms like Twitter, will find an eerily silent workplace.

The not-for-profit Wikimedia Foundation, which oversees it, has around 170 employees. But its life blood is the “community” of over 76,000 volunteers who create and update entries remotely.

“Our job is to provide the sum of all knowledge,” says Erik Möller, the foundation’s deputy director. But like an entry in a fast-changing field, Wikipedia itself is due an update.

After a year-long search, the foundation is expected to name a new boss in March. The requirements are stiff: the search committee recently admitted it had been looking for a “unicorn”.

He or she must ensure the non-profit’s financial future, rebalance its content—and work out how to attract not only enough contributors, but the right sort.

The current boss, Sue Gardner, transformed Wikipedia’s once-feeble finances. When she started in 2007 the foundation had funds of just $7.3m, a staff of 12 and headquarters in a dingy shopping centre in St Petersburg, Florida. Last year it raised $50m from donations and grants.

The average reader donated 11 cents. Her replacement will have to decide whether to establish an endowment to help ensure future financial stability. And what about selling ads? “I would never say never, but no,” says Lisa Seitz Gruwell, the foundation’s chief revenue officer.

Wikipedia’s most pressing difficulty is finding and keeping contributors, says Phoebe Ayers, who sits on the foundation’s board. The number of editors for the English-language version has fallen by a third in seven years (see chart). When Wikipedia was launched, one attraction was being able to see updates straight away; now any teenager on Facebook can experience that thrill. It also faces more competition for volunteers’ time online. 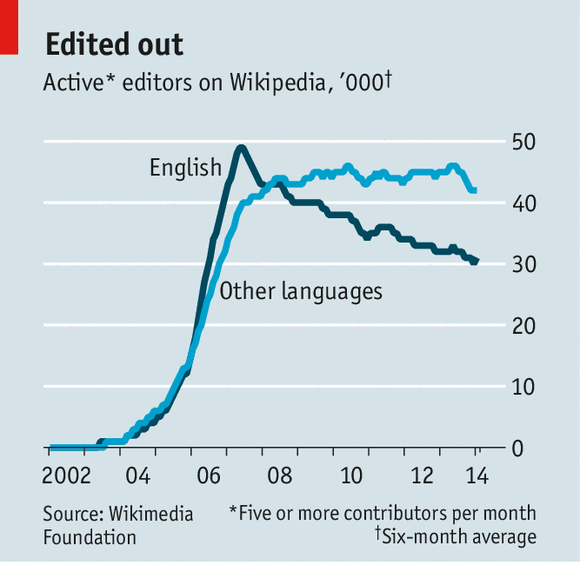 Wikipedia is “starting to show the limits of the volunteer-only model”, says William Beutler, the author of “The Wikipedian”, a blog. The fabled grumpiness of established editors is one reason: “Please do not bite the newcomers” runs a reminder on its noticeboard,

presumably frequently ignored. Last year it added a “thanks” feature, so editors can be complimented for their work, rather than just harangued for errors on message boards.

But it still needs to do more, thinks Mr Beutler, perhaps including paying contributors—though that would be resisted by many Wikipedians, who fear creeping commercialisation. A decade ago, the mere discussion of taking advertising caused a schism, with a purist Spanish version splitting off.

A greater diversity of writers would be welcome, too. Today’s bunch are 90% male and mostly from rich countries. One consequence is coverage that is comprehensive on science and technology, but patchy on poorer regions and social issues.

A recent analysis found that only 2.6% of its “geo-tagged” articles are about Africa, which accounts for 14% of the world’s population. Various groups are trying to make its coverage less skewed, in different ways.

On March 4th the Royal Society in London will hold an event to update articles on women scientists, which tend to be incomplete or even non-existent.

Wikipedia wants more readers, too, especially in places where information is in short supply. In some languages—for example Malagasy, Madagascar’s national language—it is almost the only reference work and a valuable “cultural repository”, says Ethan Zuckerman of MIT’s Media Lab.

Through a project called Wikipedia Zero, mobile operators in 25 countries, including Cameroon, Malaysia and South Africa, supply Wikipedia free to smartphone users. A pilot programme in Kenya lets owners of phones that are too basic for internet browsing receive entries by text message.

As if all that were not enough, Wikipedia’s new boss will also need to work out how the transmission of knowledge should keep pace with changing patterns of consumption.

It is trying to follow the shift from personal computers, for example, by making it easier to edit articles on mobile devices. But only the most devoted will spend their commutes editing entries instead of playing Angry Birds.

And what will Wikipedia be, when information can be supplied by voice or wearable devices like Google Glass, asks Jeff Jarvis of the City University of New York’s journalism department? If it is as popular then as it is now, another victory lap will be in order.