The President of India, Shri Pranab Mukherjee presented the Gandhi Peace Prize for the year 2013 to Shri Chandi Prasad Bhatt.Chandi Prasad Bhatt is an Indian Gandhian environmentalist and social activist, who founded Dasholi Gram Swarajya Sangh(DGSS) in Gopeshwar in 1964.

Which later became a mother-organization to the Chipko Movement, in which he was one of the pioneers, and for which he has been awarded the Ramon Magsaysay Award for Community Leadership in 1982, followed by the Padma Bhushan in 2005.

Previous recipients of the award include:

Speech by the President of India

It gives me immense pleasure in presenting the Gandhi Peace Prize Award for the year 2013 to Shri Chandi Prasad Bhatt, a life-long Gandhian and devoted and far-sighted modern environmentalist of our time.

The Gandhi Peace Prize was initiated in 1995, the 125th year of Gandhiji’s birth. The award is an expression of our belief that the 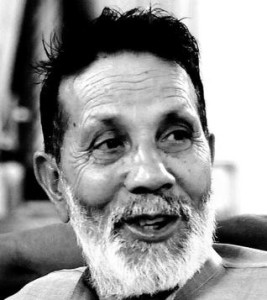 ideals that Gandhiji espoused are part of our collective living heritage. This heritage is deeply imbued with the idea of being ‘one people.’ It is a celebration of our diversity, our plural culture, our many languages, religions and different modes of life.

This was the idea that moved those who strove for India’s freedom. Our deep and abiding commitment to democracy stems from this idea. We continue to be guided by these ideals; we remain committed to them not because it is our past, but because it is also our future.

Gandhiji said ‘My Life is My Message”. Smt. Indira Gandhi in her foreword to the 90th Volume of the monumental compilation of Gandhiji’s writings The Collected Works of Mahatma Gandhi, explained the significance of these words. She wrote –

“He was one of those who spoke as he thought and acted as he spoke, one of those few on whom no shadow fell between word and deed. His words were deeds, and they built a movement and a nation and changed the lives of countless individuals.”

What is this shadow that Indira Ji spoke of? It is the shadow of untruth and falsehood. Only a person who saw Truth as God could speak of Life itself as a message.

The recipients of this award in the past include President Julius Nyerere, President Nelson Madela, Vaclav Havel, Archbishop Desmond Tutu and Baba Amte among many others. Ramakrishna Mission and Bhartiya Vidya Bhavan are two organisations that have also been conferred this honour.

Each of these individuals and organisations have through their life and work taken forward the Gandhian ideals of human freedom, compassion for fellow beings and the capacity to be resolutely non-violent and caring in the face of terrible injustice. Their work exemplifies the universality of the non-violent action as a mode of attaining a just and equitable society.

We have gathered today to confer the Gandhi Peace Prize upon Shri Chandi Prasad Bhatt, whose life has also been his message. Shri Bhatt’s work embodies a unique love, a love that has long since become universal. It is a love of Nature and Nature as encompassing entire creation.

Shri Bhatt was born into a family of farmers and priests to the Rudranath Temple in Gopeshwar, Uttarakhand. Being a hill man, he knew the hardships of his fellow villagers in the backdrop of scarcity of employment, healthcare, lack of infrastructure and education. As a true Gandhian and member of the Sarvodaya movement, he realized the need of the time.

The aspirations of the people inspired him organize the Dashauli Gram Swarajya Sangh in 1964. He dedicated himself through the Sangh to improve the lives of villagers, providing employment near their homes in forest-based industries, and fighting against wrong policies through Gandhian non-violent satyagraha.

The Chipko movement started by Shri Bhatt in 1973 followed the same method, that is, of peaceful and non-violent Satyagraha for the redressel of the legitimate rights of the hill people to collect wood and fodder and saving them from natural calamities owing to large scale deforestation.

The Chipko movement was and continues to be a movement of deep love. Love as enacted in the act of hugging trees. This action meant embracing Nature in all its diversity, bounty and munificence. The movement holds in its embrace not only the trees of Shri Bhatt’s beloved Gharwal but all creation across the world.

It highlights the unique responsibility of protecting creation that has been placed on human beings. It is a movement of love against pulverising greed. And it is in this sense, Shri Bhatt’s work draws upon the life and thought of Mahatma Gandhi.

Gandhiji, like Poet Tagore had an abiding concern with Nature and the unique placement of human consciousness in this vast and bafflingly intricate relationship. While the Poet sang of its glory and bowed his head on all our behalf. Gandhiji placed Love at the heart of his understanding of human –nature relationship.

Gandhiji said he had no use for economics without ethics. This simple injunction created a moral frame within which human ingenuity has to function. The limits to human greed have to be defined by inner imperatives and not external constraints. This inner imperative that he called beautifully “a small, still voice” is available to all of us, if we cultivate the capability to listen to it and follow its dictates. A capacity that Shri Bhatt acquired and demonstrated through practice.

By placing ethics at the heart of economics, Gandhiji gave us an idea whose significance we have just begun to understand. This is the idea of Trusteeship, based on the idea of faith which is a unique human capacity. All of us live by and through trust. Gandhiji asked us to be Trustees and to have faith in the goodness of our hearts and the hearts of others. This goodness would enable us to act as Trustees of what is ours and not ours.

To be a Trustee is to see Nature as belonging to all creation and those who are yet to come. The idea of Trusteeship has been also seen as an idea of re-distributive justice. Those with wealth and capability for generating wealth use it for the benefit of others and for society at large to whom also this wealth belongs. Shri Bhatt’s movement is one of the finest examples of this idea of Trusteeship. Through his work, Shri Bhatt has reminded this nation and the world as a whole that we are responsible for the future as well.

When we act as Trustees, we act non-violently. Ahimsa is not just a method or an instrument. It requires recognition of the humanity of others, including the humanity of those we seek to challenge, including the State. Ahimsa is based on the idea that others are capable of recognising Truth and acting upon it however misguided or even oppressive they might be. Ahimsa is not just non-injury. It is an active force that embraces the other, eradicating the differences between I and Thou.

Poet Tagore and Gandhiji were two modern Indians who recognised the force of such Ahimsa, which frees the unjust and the oppressor from the need and desire to perpetuate injustice and suffering to others. Ahimsa deepens freedom and enlarges its scope to include in its ambit, the other. Shri Bhatt’s movement showed the way of practising Ahmisa by physically embracing the endangered and the inanimate. Shri Bhatt has not only deepened our understanding of responsibility but also provided an object lesson to the world on the power of Ahimsa.

We in India must always keep in mind that we are the Trustees of the heritage of Mahatma Gandhi. As Trustees, it is our sacred duty to preserve, protect and disseminate this heritage, which is truly a legacy of all humanity.

The Government of India, through the Ministry of Culture has taken two significant and long lasting initiatives in this regard. In September last year, the Gandhi Heritage Portal was dedicated to the people of India and the world. This is an authentic, comprehensive, open source digital archive of Gandhiji’s writings and the scholarly work around his ideals. The Gandhi Heritage Portal uses technology to bring to the world message of Gandhiji.

The Ministry of Culture also launched a five year mission called the Gandhi Heritage Sites Mission. This Mission is mandated with the preservation of the built heritage of Gandhiji’s life. It will create an architectural database and provide guidelines for the protection of around 39 crore Sites associated with Gandhiji’s life in South Africa, Bangladesh, England and of course India. I am certain these initiatives will prepare the ground for us to renew our commitment to Gandhian ideals as we mark two significant events in the coming years.

On 9th January 2015, we will mark 100 years since Gandhiji’s return to India after his long and life altering Satyagraha in South Africa. This would be an occasion for us to celebrate not only Gandhiji but all those Pravasi Bhartiyas, persons of Indian origins who have made significant contributions to their adopted countries as well as mother India. In 2019, we will also mark 150th anniversary of Gandhiji’s birth, which we can truly celebrate by ending the indignity of homes without toilets and making a success of the Swachh Bharat Abhiyan announced by the Government to ensure hygiene, waste management and sanitation across the country.

Shri Bhatt, in honouring you we honour all those countless women and men who became Trustees of the Nature and who through their embrace expanded our Swaraj. I salute you for your dedicated, tireless and invaluable work for the conservation of the environment. I also thank you for your immense contribution to our nation and wish you good health as well as long years of continued service to our people.