The election results of worlds largest democracy will be declared on April 16 and the Opinion polls and exit polls are all pointing NDA’s way . How accurate are these predictions ? and  what are the recent developments in this area ?

First we need to have clear idea about various terms relating to the polls .

Today both Hindu and Indian Express published front page stories regarding the exit polls , how accurate they might be ?

EPW published an article in this matter

Election surveys are seen as covert instruments used by political parties for making seat predictions and influencing the electorate in India. It is high time opinion polls take cognizance of the situation to establish their credibility and impartiality.

Here is the article Status of Opinion Polls Media Gimmick and Political Communication in India by Praveen Rai.

The predictions are wrong most of the times in terms of numbers and in politics numbers can change every thing and new coalitions may form overnight . 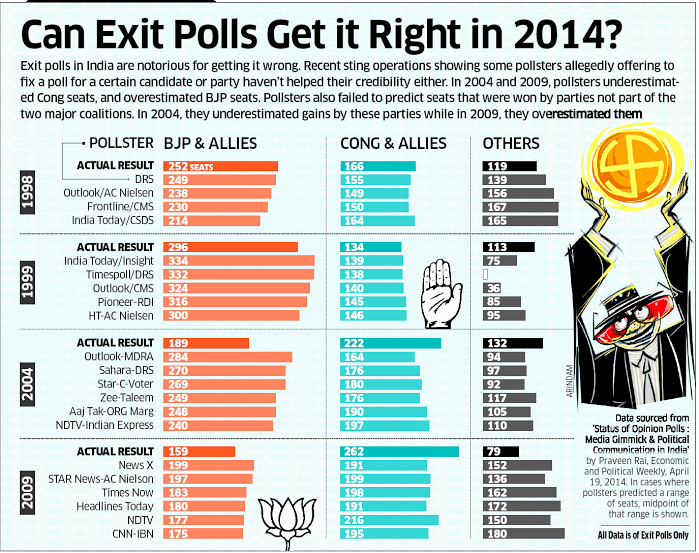 The Conclusion give by Praveen Rai isContrary to their foreign counterparts, media opinion polls on elections in India have focused more on predicting the number of seats major political parties are going to win or lose in the elections rather than understanding the key issues facing the electorate. A recent sting operation on polling agencies have also revealed that seat prediction figures are manipulated in favour of their clients.

Thus election surveys have been reduced to a media gimmick of only predicting the election results that are quite often wrong or off the mark. As a result election surveys are seen as covert instruments used by political parties for making seat predictions and influencing the electorate in India. Therefore, the Election Commission should ban forecasting before the elections but not the opinion polls.

The recent debate is that Opinion polls should be banned and Yogendara Yadav has written an article in TheHindu regarding this .

Opinion polls should be regulated, not banned. Ideally, it should be self-regulation by pollsters and media organisations.

The 2014 election predictions are like this from various sources

These exit polls may not be accurate all the time but it is evident that is going to be a Modified India . pic.twitter.com/AAywRIa5Zt

I don’t like predictions but just for fun I will add my own :

I am not affiliated to any political parties and my prediction is just wild guess and for fun not  supporting or opposing any one .